Back to all posts

The Battle Over Abortion: Part 1 The Preexistence of the Soul

We present Part 1 of our article on The Battle Over Abortion, The Preexistence of the Soul, which provides the background and global view of our current thinking. Part 2: The Crack in the Cosmic Egg, explores the metaphysical causes underlying the turmoil in our world today. It will be available in the near future. 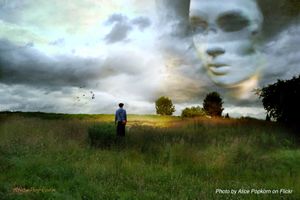 Why does the issue of abortion rights cause such a heated debate? We begin by discussing the spiritual implications of terminating a pregnancy, and why our right to do so causes such contention.

We will look at this multi-level issue from 3 different perspectives:

We begin by sharing the statement released by Unity’s parent organization, Unity Worldwide Ministries—use this link to read it: We Stand For Reproductive Rights. Whereas this statement addresses women’s rights, it does not broach the question of the morality of terminating a pregnancy. Unity’s other teachings, when taken as a whole, do address that issue.

When providing spiritual counseling concerning abortion, we stress two things: First, that in this, as in all things, we counsel folks to go to God first, then to follow divine guidance in pursuing action in the outer world. Unity does not take a stand for or against abortion. Unity takes a stand on the individual’s right to follow the guidance they receive in prayer.

The second thing we stress regarding abortion is the eternal validity of the soul. Unity teaches that each soul is an expression of God, eternal and indestructible. We have always existed and will always exist. It is the notion that souls are created in the womb, at some point between conception and birth, that has led to the heated debate over terminating a pregnancy.

This notion leads us to the role that religious views play in our justice system.

Christianity did not always teach that souls are created in the womb. Until 553 CE, the church accepted the Doctrine of Preexistence, Preexistence of the Soul. It was at the 2nd Council of Constantinople that this doctrine was outlawed and declared a heresy. The teaching of a heresy led to excommunication and even execution. Outlawing this doctrine also eliminated any reference to reincarnation in Christian theology.

(God speaking to Jeremiah) “Before I formed you in the womb I knew you,
and before you were born I consecrated you; I appointed you a prophet to the nations.”
(Jeremiah 1:5 NRSV)

(David speaking to God) “Your eyes beheld my unformed substance.
In your book were written all the days that were formed for me,
when none of them as yet existed.”    (Psalm 139:16 NRSV)

(Paul speaking to the Ephesians) “just as he chose us in Christ before the foundation
of the world to be holy and blameless before him in love.” (Ephesians 1:4 NRSV)

Consider some of the contradictory teachings and practices of Christian churches, especially the historical Catholic church, including:

Though there are many more details involved, and much history about how these teachings evolved, we can conclude a couple of important things--these teachings gave great power and control over the population to the church authorities. And that they have influenced our justice system, and our everyday morals, often in ways that are invisible to us.

Though traditional Christian denominations teach that souls are created in the womb and that the afterlife experience depends on Earthly obedience, some other groups teach the eternal validity of the soul. These include New Thought and Mormons.

Most of the other world religions teach about reincarnation. In some Eastern spiritual traditions, many people believe the spirits of the unborn have countless opportunities to incarnate, and so if a mother chooses not to give birth, it doesn't mean the spirit can't try again. The view that the unborn are spiritual beings that deserve our love and respect is shared, but women who have abortions are spiritual beings as well, and it is their right to choose. To have an abortion is a part of the cosmic cycling of spirit from life to life. In these traditions, death is not viewed as final. And life is deeply cherished.

In the Jewish faith there is no teaching of an afterlife. Their teachings about abortion are well-defined and strikingly different from Christian thought

Life does not begin at conception under Jewish law. Sources in the Talmud note that the fetus is “mere water” before 40 days of gestation. Following this period, the fetus is considered a physical part of the pregnant individual’s body, not yet having life of its own or independent rights. The fetus is not viewed as separate from the parent’s body until birth begins and the first breath of oxygen into the lungs allows the soul to enter the body.

Jewish law advises abortion if the pregnancy causes any risk to the mother’s physical or mental health.

So, once again, please notice the Christian influence on the American justice system. When we understand how we got to the present moment, then learning about the foundational beliefs of our spiritual culture, and realizing that these were not always the same, gives us the information needed for our personal decisions, and enables us to gain a deeper perspective of the contention in today’s world.

This concludes Part 1 of our article on The Battle Over Abortion, The Preexistence of the Soul, which provides the background and global view of our current thinking. Part 2: The Crack in the Cosmic Egg, explores the metaphysical causes underlying the turmoil in our world today. It will be available in the near future.